Honor someone you love.

Your gift is matched. And 100% goes to our charity partners.

Welcome! Racing to End Alzheimer’s gives you a chance to honor someone with dementia who championed you and made a difference in your life. When you add your loved one’s name to our race car, 100% of your donation goes to fund the care and the cure for Alzheimer’s disease. And it’s matched by our generous racing sponsor, Legistics! If you sign up now, your loved one’s name will be on board all season long. So please have a look around…and join us!

So many ways you can help Read More
The Team
The Car

Donate Now
Or make a donation in any amount 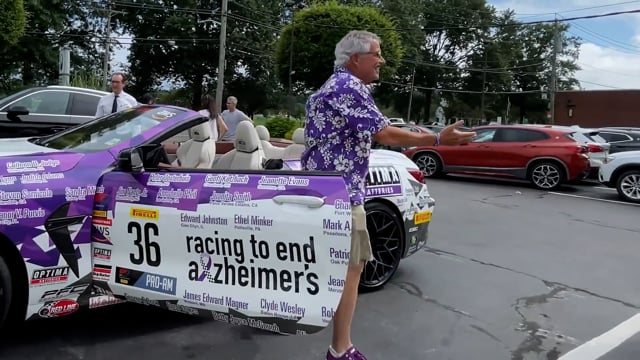 What do you do when someone you love is diagnosed with Alzheimer’s?

If you’re our founder, Phil Frengs, you decide to make a difference in the fight against this insidious disease that affects 6 million Americans and 50 million people worldwide.

“When my wife Mimi was diagnosed with early-onset Alzheimer’s, I was devastated — and felt so alone. I started Racing to End Alzheimer’s as a way to channel my emotions into something that might help others who were having similar experiences.”

Phil is a racing buff. His company, Legistics, has sponsored race cars for a decade. So, he wondered:

“What if we replaced the big sponsor logos on our car with the names of people who are facing dementia or who have suffered from this disease? Wouldn’t families and friends contribute $250 to honor someone they love in such a unique and visible way?

“And wouldn’t they be happy, even relieved, to make a contribution toward a cure? Toward caring for families who are on this same difficult journey? Especially if I’d cover all expenses and match every donation, dollar for dollar?”

For hundreds of donors since we started in 2017, the answer has been a resounding “Yes.”

And “Yes” is what we hope you’ll say to honoring your own special Champion by joining us in the fight of our lives at Racing to End Alzheimer’s.

For 2022, our donations will be split among a few deserving organizations. Our primary beneficiaries are:

100% of the money we raise is matched by Legistics and goes to our worthy charity partners. Legistics covers all marketing and administrative costs as well. In total, we’ve raised over $500,000 since we started.

If you’re one of them, we’re truly grateful to you for helping to spread the word and keeping this cause vibrant.

Now we’re asking you to get back into action as we celebrate our sixth season!

Use #r2endalz on Facebook and Instagram. Tell your friends. And donate whatever you can afford. Every dollar is matched. Every penny goes to the cause.

Let’s make Racing to End Alzheimer’s an even bigger success again this year!

About the race team

Driver Nick Galante was half of the team that won the championship in 2016, and he did it again in 2018. Nick is co-piloting a beautiful, powerful new Porsche Cayman GT4 RS Clubsport with the up-and-coming Sean McAlister, the 2019 recipient of the IMSA Hurley Haywood GT3 Cup Scholarship. Backed up by a savvy, experienced Hardpoint Motorsports crew, and supported by Legistics, the No. 22 Porsche is a strong contender in IMSA’s 2022 Michelin Pilot Challenge series. Follow the team’s exploits here.